This page is furnished for the reader who would like to know more of the unique history of this area, and about current-day Brenham.

A Brief History of Brenham, Texas

Spain and France contested for supremacy in this part of the New World through the 1600s and 1700s. The French sent the acclaimed explorer LaSalle whose expedition were probably the first Europeans to explore this area. Viewing that as an intrusion into their lands, Spain built a road across what is now Texas and Washington County from Goliad all the way to Nacogdoches. What is now known as The Old Spanish Trail would give the military of New Spain faster access to defend its claims.

The governor of New Spain was not successful in getting Spaniards to move to and settle in their northern claim of Tejas, as it was considered to be a barren and harsh land. In early 1821 the Spanish Government agreed to Stephen F. Austin’s proposal that rested on his father’s agreement with Spain. The Spaniards invited Austin to bring his first group, the Old Three Hundred colonists, which would economically develop the area and help Spain's claims to the territory. So many of them although not all of them, pioneered their homesteads in what is now Washington County.

Riverfront lands were sought in that era due to river travel being the best option before highways were built. The confluence of the Brazos River and the Navasota River near the place where the Spanish La Bahia Road crossed the rivers became the site of the town of Washington. In 1836, representatives from all over Texas gathered to sign the Texas Declaration of Independence, making the town of Washington the birthplace of Texas.

When the railroad era began, towns would sometimes oppose the railroad construction through their town. That happened in 1858 in the town of Washington, the residents did not want to pay to the Houston & Texas Central Railway a so-called bonus of $11,000 for a line proposed through Washington. The railroad was re-routed to Navasota. Bypassing Washington, trade and passengers went elsewhere, and the town declined.

But 23 miles to the southwest, in almost the center of Washington County, events turned out to favor the town growth in the tiny Hickory Grove Community. In 1843 the residents renamed their town in honor of Dr. Richard Fox Brenham. He was a young physician who moved from Kentucky to Texas around 1830, he practiced medicine in the Brenham area and for a time in the Austin area. He served in the Texas Army in 1836. In June of 1841, Republic of Texas President Mirabeau B. Lamar appointed him a civil commissioner to the Texas Santa Fe Expedition. Brenham was a volunteer member of the Mier Expedition of December 1842. In 1844 Washington County residents voted to make Brenham the county seat. 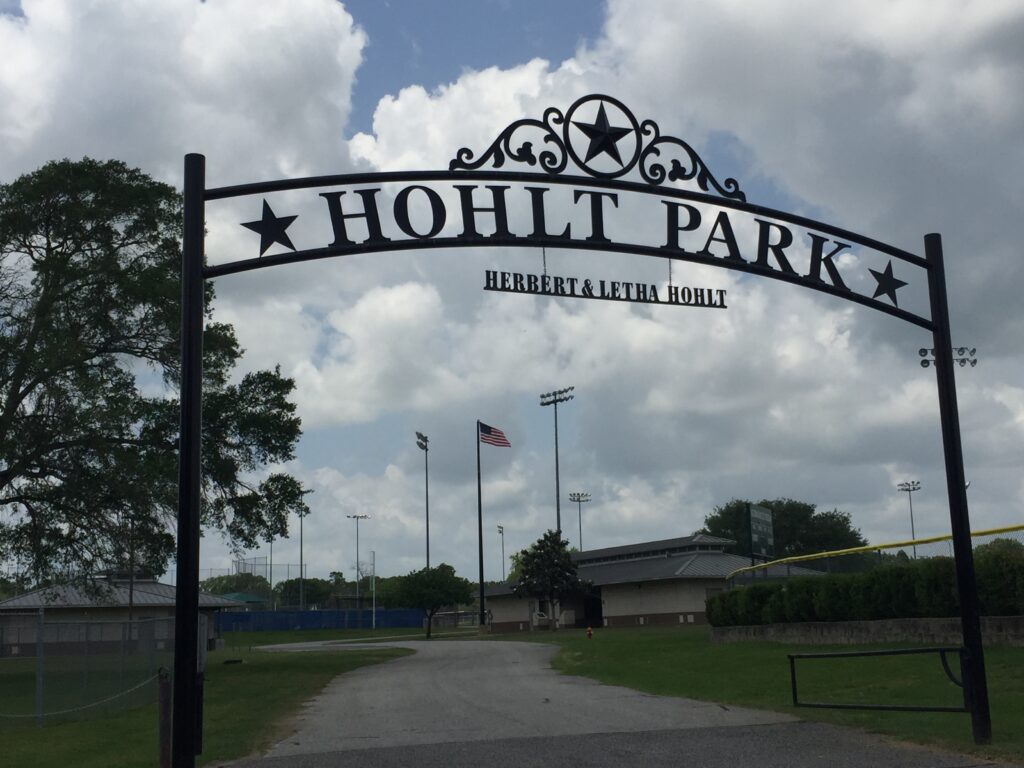 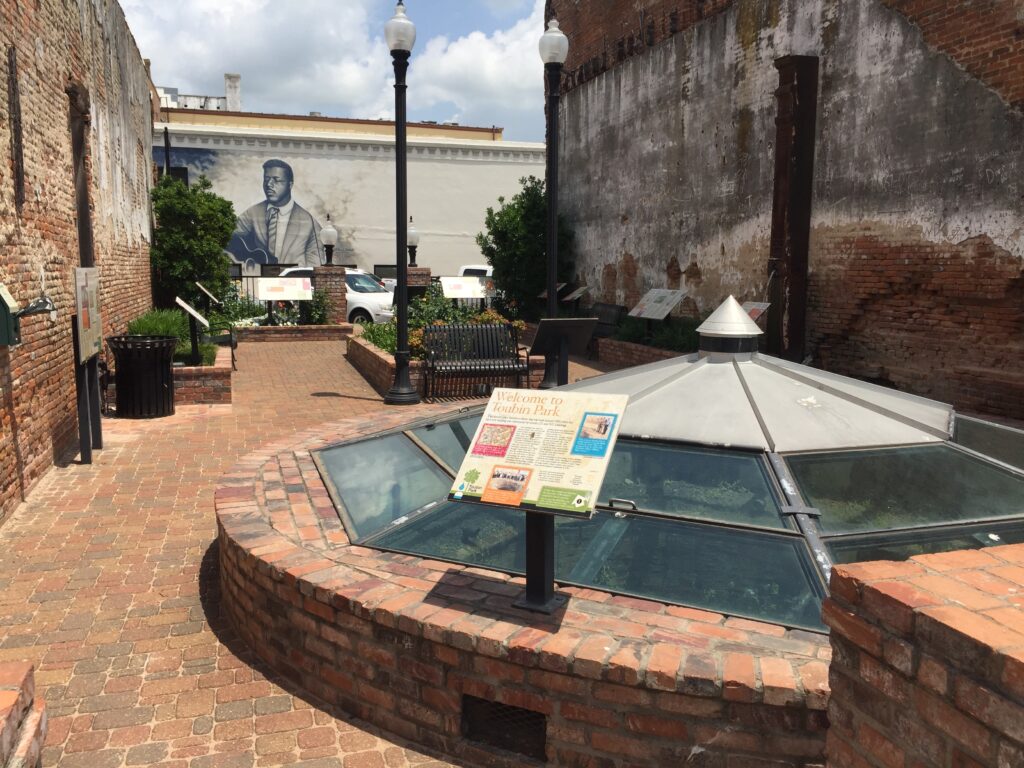 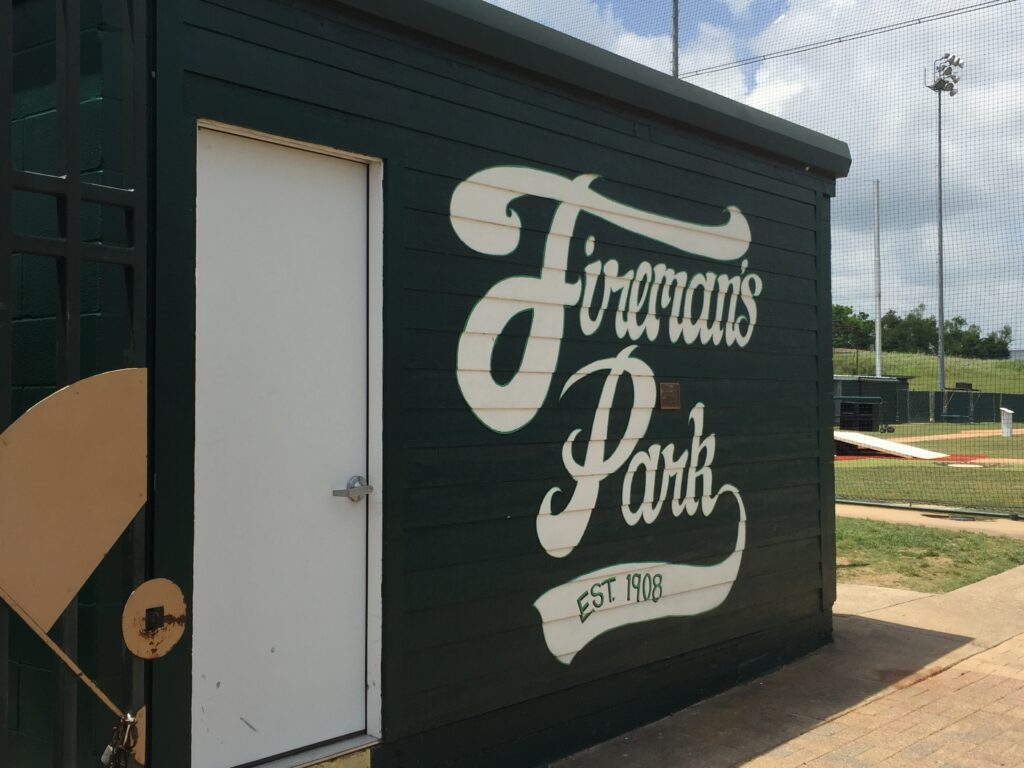 Brenham grew during those decades to produce manufactured goods in addition to the abundant farm produce of corn, cattle, and cotton from the area and they needed to deliver it to distant markets. Existing dirt roads were slow and unreliable. In this town, a railroad sounded like just what they needed. So local leadership caused the Washington County Railroad to be built in 1861, connecting to Hempstead where the H&TC RR continued in other directions including the port of Galveston where ships carried produce and products many places. Brenham’s investment helped it become the county’s largest town.

The coming of the Civil War put many plans on hold and ended many other plans. But after the war the residents got back to work. The more modern industries grew, aided by the arrival of many European immigrants, a large portion of which were from Germany, who came based on the good reports of other German pioneers who came to the region around 1830 contributing skills and trades to the area. Cigar and silk manufacturing, a variety of wholesale and retail trade opened through the late 1860s and 1870s. Iron works, machine shops, cottonseed mils, cotton compresses were in business by the 1880s. Ambitious residents opened bakeries, photography studios, tailoring shops, and other modern services. More expansion in the 1890s saw banking expand, and mattress manufacturing, metal fabricating, food and fiber processing.

Brenham remained a center of economic activity for the region, partly thanks to its population doubling every decade from 1860 through 1900. And from 1910 to 1950 more enterprises including marketing, processing, merchandising took root in the Brenham region economy.

Churches, civic clubs, and an Orthodox Jewish congregation organized over the decades. The Fortnightly Club of book readers (still existing) established the Brenham Public Library in 1899. In 1866 the Southern Enquirer newspaper began, to become the Brenham Banner-Press in 1913 and still published today. 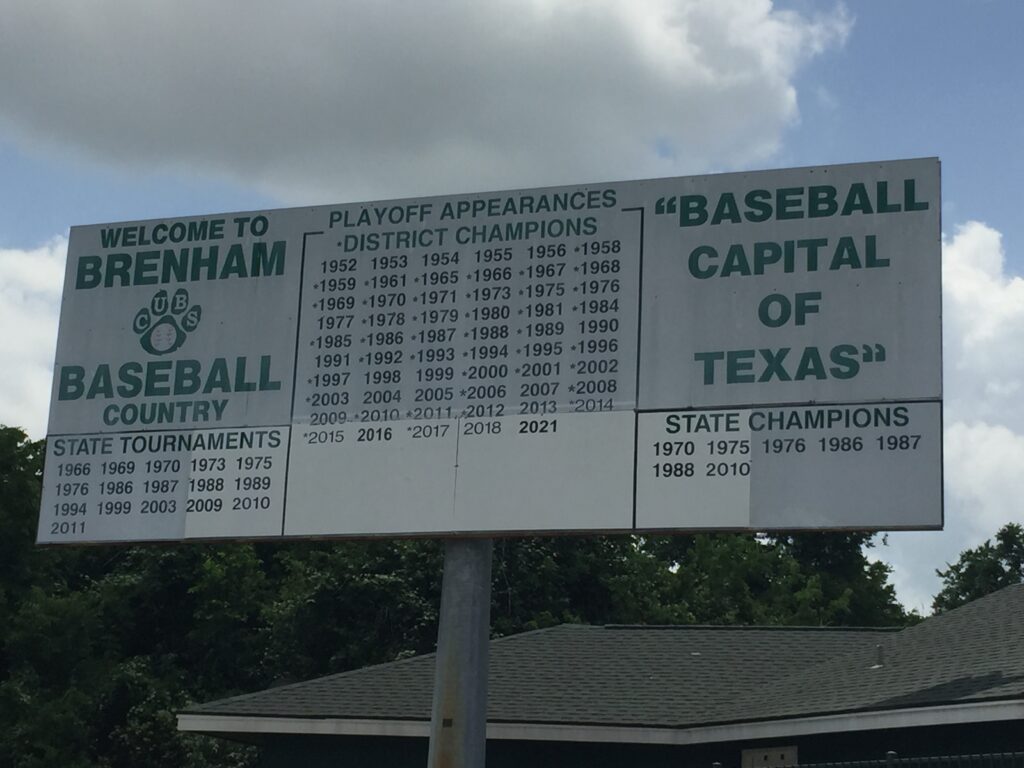 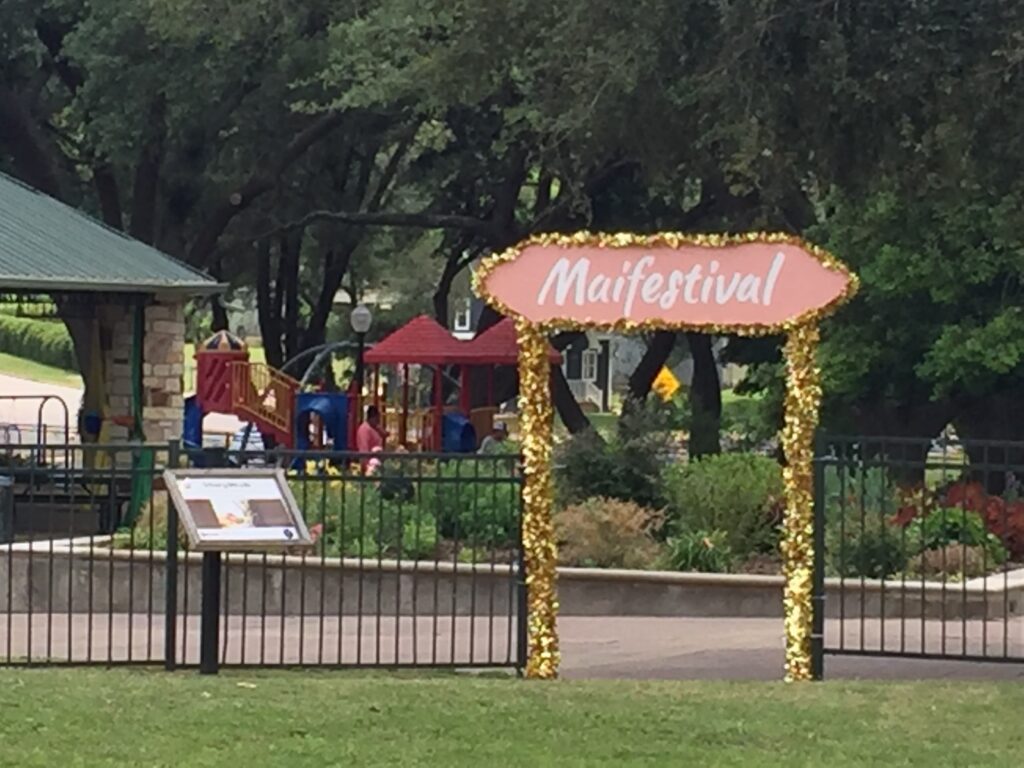 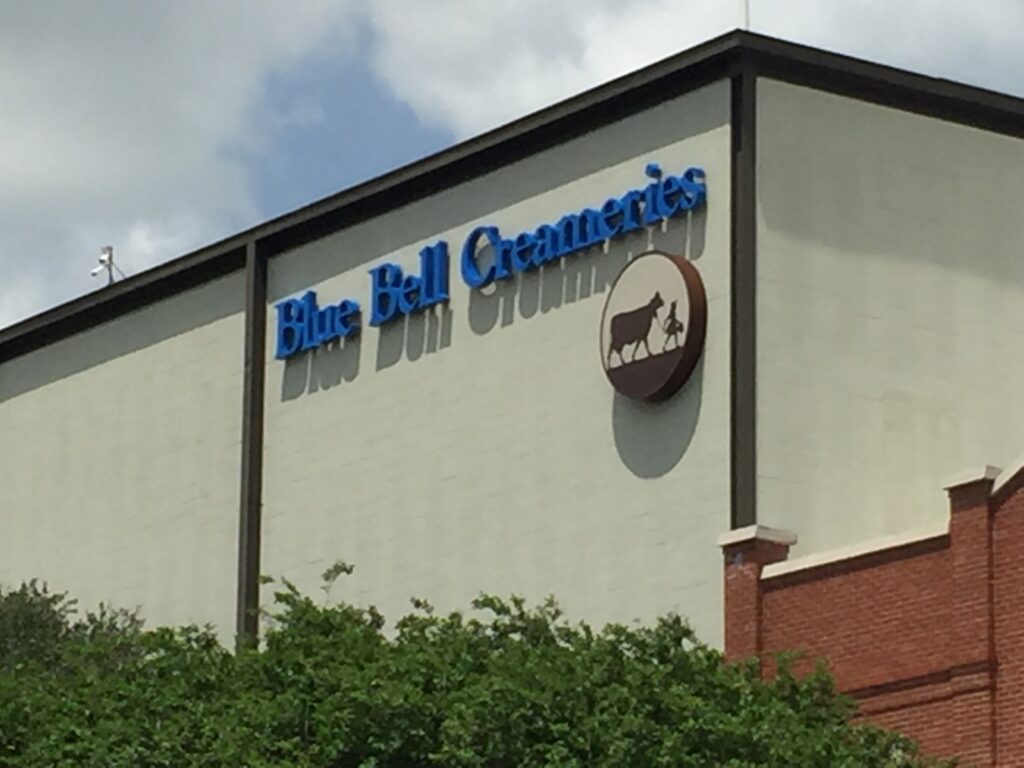 A priority from the beginning in Brenham and Washington County was and is education. Many schools and colleges were founded in the region. The first tax-supported school system in Texas was started in Brenham in 1875, developing a reputation for quality education in Brenham and the area. In 1883 German Methodists founded the Mission Institute that later was renamed and changed hands to now be known as Blinn College. 1891 the Lutheran College opened, then in 1900 a Black Female College opened.

A Great Place to Work and Live

1953 saw the establishment of the Brenham Industrial Foundation which prompted a variety of businesses to begin and others to expand. The Brenham Creamery Company which was in business since 1907 became Blue Bell Creameries and then the biggest ice cream producer in Texas by 1970. Many new light industries, processing businesses, and manufacturers made Brenham their home.

Recreation choices and housing choices make Brenham a great place to live. Starting with the local heritage of excellent schooling that helps young people achieve. Festivals offer families a change of pace during every season. A notable example is the annual Maifest Celebration since 1881 with origins in 1874 and the German custom of the Volksfests.  Held in Fireman’s Park, which draws attention to the city’s parks system. Residents and visitors also enjoy the Christmas Parade, the Washington County Fair, Texas Independence Day celebration, Concerts on Downtown Brenham’s Square, and more throughout the different seasons.